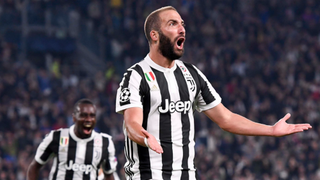 Gonzalo Higuain returned to form in timely fashion as he scored one goal and played a key role in another to help Juventus claim a hard-fought 2-0 victory against Olympiacos in Champions League Group D.

The Argentina forward had netted just twice this campaign prior to Wednesday's clash at the Allianz Stadium and was benched for the second game running, with Mario Mandzukic preferred up top.

However, with Juve - shorn of Miralem Pjanic, who was injured in the warm-up - struggling to break Olympiacos' stubborn rearguard, Massimiliano Allegri called on the former Real Madrid man just short of the hour.

Higuain duly made his mark, thumping in from close range with 69 minutes played, giving the excellent Silvio Proto no chance.

Having been comprehensively beaten by Barcelona on matchday one, the victory represents a vital return to winning ways for last season's beaten finalists, who move second in Group D.

Missing Pjanic's guile in the middle, Juve were fortunate not to be behind inside 15 minutes, with Seba firing over after latching on to Vadis Odjidja-Ofoe's pass.

Proto did well to keep out headers from Mandzukic and Stefano Sturaro as the hosts began to click, though Emmanuel Emenike should have done better after he raced clear of Juve's defence only to seek a team-mate rather than go for goal when one-on-one with Gianluigi Buffon.

Going direct seemed Juve's best option, Mandzukic testing Proto with a towering header before Dybala drew another fine save from the stand-in goalkeeper.

Proto was beaten moments later though, relying on the post to preserve his clean sheet when Bjorn Engels deflected goalwards.

Juve stepped up the pressure again after the restart and Dybala's glancing header flashed across the face of goal.

Douglas Costa was the next to try his luck, his rasping free-kick whistling wide of the woodwork, with Higuain introduced soon after.

It was Higuain's strike partner Mandzukic who could have finally put Juve ahead on the hour, but Proto was more than equal to the Croatian's tame header.

Proto could do little to prevent Higuain's first goal in four games, though, as the 29-year-old hammered in Alex Sandro's cross at the second attempt.

And Higuain proved his worth once more in the closing stages as he set-up Dybala at the culmination of a fine run.

Dybala's chip was cleared off the line, but Mandzukic was on hand to head in from a yard out and add gloss to a difficult victory.