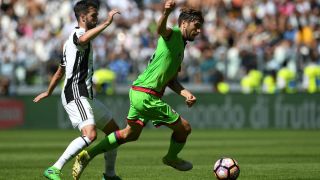 Juventus wrapped up a domestic double after clinching their sixth successive Serie A title with a 3-0 thrashing of Crotone on Sunday.

Juve's 3-1 defeat at Roma last weekend and Crotone's excellent recent form suggested it may be a tricky afternoon for Massimiliano Allegri's men, but it turned into a stroll in the Turin sunshine for the Bianconeri.

Mario Mandzukic celebrated his 31st birthday by putting Juve in front and a stunning free-kick from Paulo Dybala made it 2-0 at the break. Alex Sandro capped a wonderful afternoon with a late third.

While Juve can now turn their focus towards the Champions League final against Real Madrid on June 3, Crotone will go into the final weekend with their Serie A status still uncertain.

Davide Nicola's men - unbeaten in seven prior to today - host Lazio next weekend but will start matchday 38 a point adrift of fourth-bottom Empoli.

Victories against Pescara and Udinese in their last two outings had given the Calabrian club renewed hope, but there was never any realistic chance of them stunning the champions, who bossed proceedings from the outset.

Miralem Pjanic fired a 25-yard free-kick over the top after seven minutes before the party atmosphere moved up a notch when Mandzukic put the home side in front five minutes later.

Juan Cuadrado found space down the right and his teasing cross eluded Gonzalo Higuain but not Mandzukic, who got across his marker Aleandro Rosi and fired high into the net.

Crotone offered fleeting glimpses of attacking threat with Juve dominating the ball and only stout defending from the visitors prevented Higuain from doubling the hosts' advantage on two occasions.

The pressure eventually told six minutes before the break as Dybala curled home a wonderful, left-footed free-kick for his 10th Serie A goal of another hugely impressive season.

Crotone's best chance came in first-half injury time as Diego Falcinelli's shot struck the back of Leonardo Bonucci and flew inches wide of Gianluigi Buffon's right-hand post with the Italy goalkeeper rooted to the spot.

The second half was quiet in comparison with Juve content to sit on their lead and Crotone lacking the ambition or ability to threaten a comeback.

Cuadrado tested Alex Cordaz at his near post after 46 minutes, while Dybala had an effort correctly ruled out for offside 10 minutes later.

Pjanic fired high and wide when well placed as Juve hunted a third goal that duly arrived with seven minutes to go, Alex Sandro's powerful header hitting the crossbar with goal-line technology confirming the ball had crossed the line.

Mandzukic almost added a spectacular fourth late on before the party got into full swing at the final whistle.