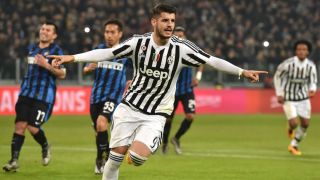 Alvaro Morata ended a 20-match wait for a goal by scoring twice as Juventus built a commanding 3-0 lead in the first leg of their Coppa Italia semi-final clash with Inter.

Morata, who had not found the back of the net for The Old Lady since scoring in the 3-1 Serie A victory over Bologna on October 4, thrashed home a first-half penalty to end his four-month goal drought after Jeison Murillo had brought down Juan Cuadrado in the box to give the hosts control of the tie on Wednesday.

The Spaniard then celebrated ending his barren spell by adding a second after half-time, as the holders took a major step towards retaining the trophy.

Inter hobbled to the end of the game with 10 men, following Murillo's dismissal for two bookable offences, and the chances of a Milan derby final were dealt a huge blow when Paulo Dybala came off the bench to fire home a third with six minutes remaining.

The home side controlled proceedings for almost the entire encounter in Turin.

Juventus wanted a penalty in the 13th minute but referee Paolo Tagliavento waved away their fervent claims when Cuadrado's free-kick struck the arm of Gary Medel.

Colombian Cuadrado then drifted past two Inter defenders and fired wide midway through the opening period.

The hosts looked typically resilient in defence, as they went in search of a fourth straight clean sheet in all competitions, and it was unsurprising that much of the match was played out methodically in midfield, given Inter's run of 10 shut-outs in their previous 16 outings.

Inter finally found themselves inside the Juve penalty area in the 32nd minute but Stevan Jovetic glanced his header wide from Danilo D'Ambrosio's cross.

A cagey affair was in desperate need of a flashpoint to spark it into life and that moment arrived two minutes later.

Cuadrado collected a chipped throughball in the Inter box and would have had the chance to shoot at goal but for Murillo, who bundled the winger over and was lucky to escape with only a yellow card.

Morata stepped up to smash home the subsequent penalty and hand the home side a lead which they never relinquished.

After waiting so long for a goal, Morata doubled his haul just after the hour mark. Patrice Evra darted to the byline and, when Melo failed to clear, the Spaniard was on hand to smash into the top left-hand corner from six yards out.

Inter's dismal night was made even worse with 21 minutes remaining, as Murillo picked up his second caution of the evening for a trip on tormentor-in-chief Cuadrado, and the visitors were left in damage-control mode.

Morata flicked a header wide from Kwadwo Asamoah's cross, and then side-footed over from Paul Pogba's wonderful pass, as the frontman came close to completing a hat-trick, but instead it was Dybala who scored the third of the night for Juve.

The substitute beat Inter keeper Samir Handanovic between his legs from 18 yards to all but end the visitors' dreams of a first Coppa final since 2011.

The second leg will take place at San Siro on March 1, with Milan leading third-tier Alessandria 1-0 on aggregate in the other semi-final.