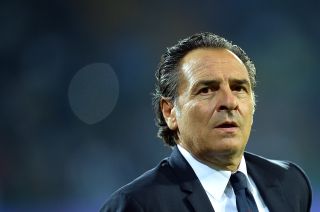 The Serie A champions are reported to be ready to offer Prandelli a return to club football after the FIFA World Cup in Brazil next year.

But Marotta has denied that Juve have any intention of parting company with Conte, who has guided the club to back-to-back Scudettos since his appointment in May 2011.

"The voices of Prandelli instead of Conte in the future are absolutely unfounded, are market rumours." Marotta said at a shareholders' meeting.

"Conte has a contract that expires in 2015, with whom we have a great relationship, we are very pleased with his job. So imagine that we are devoting ourselves looking for another coach is a thing out of all truth."

Juve are third in Serie A, five points behind leaders Roma, and are also third in UEFA Champions League Group B after failing to win in their first three matches in Europe's premier club competition.

Former Fiorentina coach Prandelli guided Italy to the final of the UEFA European Championships last year, but is reported to be ready to step down after the World Cup.