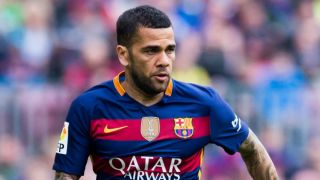 Juventus chief executive Giuseppe Marotta has strongly indicated the club will try to sign Dani Alves, but played down links with his Barcelona team-mate Javier Mascherano.

The Serie A and Coppa Italia winners have been tipped to move for the Camp Nou duo, as they prepare to challenge for a sixth consecutive Scudetto in 2016-17.

Full-back Dani Alves is under contract until the end of next season, while Mascherano - able to play in central defence and midfield - has a deal with Barca running until the end of 2017-18.

Some outlets have claimed a transfer of Brazil international Dani Alves to the Turin giants has already been agreed, but Marotta stopped short of confirming the move.

"Dani Alves and Mascherano to Juventus? Nothing is done. I can neither confirm nor deny," he told reporters.

"Dani Alves is not our player but he's an important player. We'll see what we could do considering that Juventus can compete in all the competitions.

According to TV3, Dani Alves' agent Dinorah Santa Ana denied negotiations are underway but claimed contact had previously been made with Juventus.

Juve meanwhile face a battle to keep striker Alvaro Morata, with Real Madrid expected to activate a buy-back option they hold on the Spain international.

"We will do all that we can to keep him at Juventus. We will meet Real Madrid after the Champions League final."