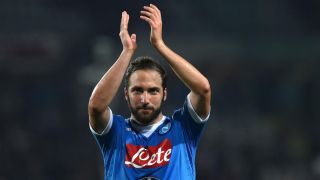 Juventus have confirmed the signing Gonzalo Higuain from Serie A rivals Napoli for €90million.

Lega Serie A announced the transfer of the Argentina striker to the Italian champions had been completed earlier on Tuesday.

And the Bianconeri confirmed the deal has been ratified on their official website, the former Real Madrid player agreeing a five-year deal in something of a coup for Massimiliano Allegri's men.

Napoli posted a tweet to announce Juventus had met a buyout clause in Higuain's contract and they will pay the hefty transfer fee - the third most expensive in football history after Cristiano Ronaldo and Gareth Bale's respective €94m and €100m moves to Real Madrid - over the course of two financial years.

Higuain set a new league record with 36 goals in 35 matches last season and is set to link up with compatriot Paulo Dybala and Mario Mandzukic in attack at the Juventus Stadium.

He becomes Juventus' fifth signing of the close season after the captures of Miralem Pjanic, Marko Pjaca, Medhi Benatia and Dani Alves - moves set to be partially funded by the expected sale of star midfielder Paul Pogba to Manchester United.

Alvaro Morata's return to Real Madrid cleared the way for a new striker to join Allegri's squad, while Napoli's hunt for a replacement reportedly leaves Inter captain Mauro Icardi in their sights.