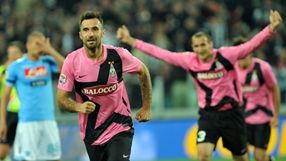 An enthralling weekend of Italian action ended with second-placed Juve prevailing in Turin thanks to defender Leonardo Bonucci using his knee to divert Mirko Vucinic's shot into the net after 54 minutes.

After a shaky few weeks, Juve can again smell a first title since their 2006 match-fixing demotion after champions Milan drew 1-1 at Catania on Saturday amid more goal-line controversy when a Robinho effort was wrongly ruled not to have gone in.

Eight games remain in the best title-run many Italians can remember given the dominance of Inter Milan from 2007-2010.

Seventh-placed Inter reignited their outside hopes of reaching third spot after Diego Milito bagged a hat-trick in a 5-4 thriller at home to Genoa to boost ex-youth coach Stramaccioni, who took over from Claudio Ranieri last week.

"Contrary to what is being said, coming from the youth sector, I've found a united Inter, a big family," Stramaccioni, in charge at least until the end of the season, told Mediaset.

"It was only Inter v Genoa, but it was important, so therefore it was lovely."

The hosts raced into a 3-0 lead with Argentine Milito scoring twice within the first half-hour and his countryman Walter Samuel sliding home Lucio's cross in the 38th minute.

Genoa refused to lie down and goals from Emiliano Moretti and Rodrigo Palacio gave 36-year-old Stramaccioni a fright.

A 74th-minute Mario Zarate goal looked to have sealed the win but a frantic final 10 minutes, in which three penalties were scored including Milito's third goal, almost led to a draw.

However, Inter ran out winners despite having goalkeeper Julio Cesar sent off in the 79th minute and are now seven points off third-placed Lazio, who occupy the Champions League qualifying round berth but went down 3-1 at struggling Parma on Saturday.

The visitors had taken the lead through Andrea Caracciolo's deft header but Roma hit back when Marquinho equalised with his first goal for the club via a bullet header after 25 minutes.

Roma remain sixth but are now only a point behind Napoli and Udinese, whose poor form continued with a 1-0 loss at Siena.

Fiorentina's recent slump went on as they lost 2-1 at home to Chievo, leaving them in