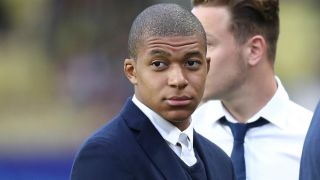 Monaco went down to a 2-0 first-leg home loss, Gonzalo Higuain scoring both goals for the visitors.

Leonardo Jardim's men had made a bright start to the match, Mbappe twice being denied by Gianluigi Buffon prior to Higuain's opener.

Radamel Falcao and substitute Valere Germain were also thwarted by Buffon after the break and Mbappe felt his side's failure to be clinical proved decisive as Juve took advantage of the fewer chances they had.

"We lacked a little bit of experience, but most importantly of all we weren't clinical enough in front of goal," Mbappe was quoted as saying by UEFA.

"We created a lot of chances and just didn't take them. On the other hand, Juventus had two clear chances and scored two goals. We have to learn from this.

"Buffon made a couple of good saves in the match. Hopefully we can score in the second leg.

"It was a good experience for us. We work every day to play against big players and this will allow us to progress quicker."

. Mbappé: "We created a lot of chances and didn't take them. They had two clear chances and scored two goals. We must learn from this." May 3, 2017

Mbappe's team-mates Fabinho and Bernardo Silva both stressed the tie was not yet over ahead of next Tuesday's second leg in Turin.

Fabinho said: "They were better and deserved the win. Still, we are going to give everything in the return.

"You can never completely write us off given our attack."

Silva added: "It was not easy to find space against one of the best teams in Europe. It will be very difficult now but nothing is impossible."