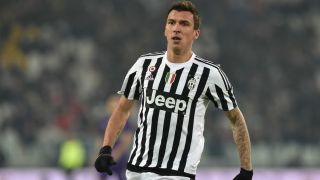 Juventus have confirmed that Mario Mandzukic and Kwadwo Asamoah have suffered muscle tears.

Both players complained of discomfort following the 3-0 Coppa Italia win over Inter on Wednesday and underwent medical tests to determine the damage.

The duo are set for four and three weeks on the sidelines respectively as Juve enter a crucial run of fixtures both domestically and in the Champions League.

Asamoah "has suffered a torn biceps femoris in his right thigh and is expected to be sidelined for two to three weeks", a club statement released on Friday confirmed.

"Tests on Mandzukic meanwhile revealed a torn gemellus muscle, with the Croatian forward's rehabilitation process estimated to last a month."

Both players will miss forthcoming league meetings with Chievo, Genoa and Frosinone, though Juve will hope Asamoah has recovered in time for the top-of-the-table clash with Napoli on February 13.

Mandzukic, meanwhile, is likely to miss that encounter with the current league leaders, as well as the first leg of the Champions League last-16 tie with Bayern Munich on February 23.