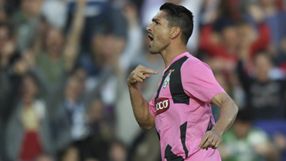 Borriello's goal on 80 minutes saved Andrea Pirlo's blushes, after he missed his second penalty in a week with nine minutes gone.

Second-placed AC Milan also won 1-0 against lowly Genoa thanks to an 86th-minute goal from Kevin-Prince Boateng.

Borriello, who has been disappointing since joining on loan from Roma, came off the bench and five minutes later smashed home a Mirko Vucinic knock-down on the half-volley.

It was a seventh win in a row for Juve, who are unbeaten after 34 games, and they moved closer to their first Serie A title since being relegated for their role in the Calciopoli match-fixing scandal.

"He deserved that goal, because he came here really motivated but not in great physical condition," said Juve boss Antonio Conte.

"He had to work to get himself back into shape... and now he's up with everyone else."

Conte added: "This season we have created a base for the future: we're returned to being competitive, we've done extraordinary work and we hope that it become extra-extraordinary.

"We're sat at a table where we've not been used to sitting: now we want to eat as well."

Milan kept in touch with their rivals thanks to Boateng, who scored from close range to sink Genoa.

Under-pressure Genoa will feel hard done by however, as they comfortably kept Milan at bay for much of the game, even creating chances for themselves.

But the sending off of Bosko Jankovic for two bookable offences with 18 minutes to go left Genoa pegged back in their own area, and it was no surprise that Boateng smashed home the winner.

The defeat leaves them fourth from bottom on 36 points, just a point off the relegation places.

Inter Milan and Napoli piled the pressure on third-placed Lazio, who lost 2-1 at Novara, in the race for a Champions League spot by winning at Udinese and Lecce respectively.

Napoli are fourth, one point behind Lazio, who have 55, while Udinese and Inter are on 52.

Lazio were beaten by a 35th-minute Mobido Diakite own goal and a stunning 79th-minute free-kick from Giuseppe Mascara.

A resurgent Inter, who have been much improved under Andrea Stramaccioni, beat Udinese 3-1 after two goals from Wesley Sneijder and a smart finish from Ricardo Alvarez cancelled out Danilo's sixth-minute opener.

Goals early in each half from Marek Hamsik and Edinson Cavani earned Napoli a 2-0 win at Lecce.