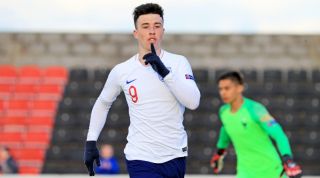 The 17-year-old impressed during this summer’s Under-17 European Championship for England by scoring three goals in three games.

That form impressed scouts from Juve and Milan at the tournament, according to the Sun, and the two Serie A giants are now set to make a move to sign him.

However, they could face competition from clubs in Germany for the former Sunderland player.

Juventus signed young striker Stephy Mavididi from Arsenal last summer and gave him his Serie A debut towards the end of the season.