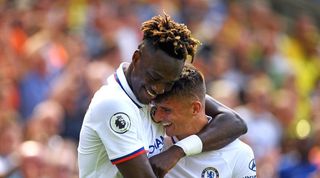 Who can believe we’re a whole, er, three games into the Premier League season?

It’s already proving to be a high-scoring year. Every team is off the mark, with Manchester City and Liverpool leading the goalscoring charts with 10 and nine respectively. At the other end, Watford’s single goal hasn’t earned them a point so far, while somehow Everton have managed to squeeze four points out of their own solitary strike.

In fact, the goals have been flying in with such alacrity, such wild abandon (that’s enough from Thesaurus.com– Ed.) that no side has yet to concede a goal: Leicester, Crystal Palace, Everton and Wolves have the stingiest defences so far, conceding two each.

But who are the individuals behind these fancy statistics? There are 55 players who have so far revelled in the ecstasy of looking up at the big screen to check that VAR has not spuriously chalked off their moment of glory – from the two who've bagged five each, to the 40 who have just the one.

We’re giving you 10 whole minutes to name as many as you can. Once your time is up, send us a screenshot of your score to @FourFourTwo and send it to anyone you think might not do as well as you. Real love.

And to those who manage to name every single player, a special prize: our respect.