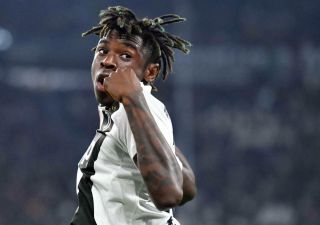 Juventus forward Moise Kean was subjected to racist abuse from the stands as the Serie A leaders won 2-0 at Cagliari, but the 19-year-old took a stance of defiance after scoring a late second goal.

The Italy international was abused all night by sections of the home support, with monkey chants aimed at him, but had the final say by netting Juve’s second goal with five minutes left.

The teenager stood at the post, his arms aloft in response to the chants.

Juventus players, led by captain Giorgio Chiellini, protested to referee Piero Giacomelli, who was also in conversations with both managers.

Cagliari skipper Luca Ceppitelli went over to the fans behind the goal, appealing for the chants to stop, while France midfielder Blaise Matuidi appeared to gesture to manager Massimiliano Allegri he should take his players off.

When play did continue, an announcement went out over the public address system to highlight the issue, which was greeted by more jeers from some home supporters before the final whistle came after five minutes of added time.

The incident came eight days after England players were subjected to racist abuse during their Euro 2020 qualifier in Montenegro and on the day UEFA president Aleksander Ceferin insisted referees would be told to be “brave” and halt matches to stamp out such abuse from “loud, aggressive and primitive” people.

Kean, whose goal added to Leonardo Bonucci’s towering header in the 22nd minute, was handed a start by Allegri at the Sardegna Arena with Mario Mandzukic laid low by illness.

He had impressed when finding the net against both Finland and Liechtenstein for Italy, before then following it up with the winner over Empoli after coming off the bench.

Juve talisman Cristiano Ronaldo was also absent, the Portugal forward battling to be fit for the Champions League quarter-final against Ajax after a hamstring problem suffered on international duty.

Cagliari had pulled themselves eight points clear of the relegation zone following a recent upturn in form, with three successive home wins. The Sardinians, though, were soon on the back foot.

Alex Sandro, the Brazilian defender making his 150th Juve appearance, sent over a cross, which midfielder Emre Can headed over.

Martin Caceres then met Miralem Pjanic’s free-kick at the back post, but his chested effort was parried away.

Kean picked up a needless caution for simulation in the 20th minute when he went down under a challenge from Artur Ionita in the Cagliari box.

Juventus swept swept into the lead in the 22nd minute when Bonucci met Federico Bernardeschi’s looping corner with a towering header.

Matuidi then planted a header over from Mattia De Sciglio’s teasing cross out on the right as the leaders pressed again.

Cagliari finally threatened just before half-time when Nicolo Barella’s through-ball from the right found Joao Pedro in space, but his first-time shot flew just over.

Juve had a penalty shout at the start of the second half, claiming handball against Paolo Farago. However, following a quick check with VAR, play continued.

The tempo dropped as the hour mark approached before Kean surged forwards, but goalkeeper Alessio Cragno was able to stop his attempted chip.

At the other end, Leonardo Pavoletti’s header from a free-kick was glanced wide.

With five minutes left, Juve made sure of the win when Kean slotted home a low cross from substitute Rodrigo Bentancur, before taking his own stand against the racist abuse.