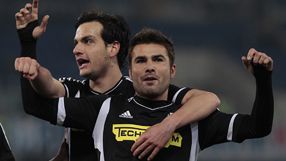 Juve, Italy's most successful club, beat Lazio 2-1 on Wednesday to go a point clear of AC Milan with six games remaining as the Turin outfit seek a first scudetto since their 2006 match-fixing demotion.

That traumatic event also led Juve to let Romanian Mutu join Fiorentina despite a decent season with the Bianconeri and his career has taken a turn for the worse since.

Disciplinary and doping problems meant he left Florence for Cesena last June but his eight goals, including a superb strike in Wednesday's 1-1 draw at Genoa, have not stopped The Seahorses occupying last place, 15 points from safety.

They will go down on Sunday if they lose at home to Juve and surprise strugglers Genoa get at least a point at Milan on Saturday but coach Mario Beretta is banking on former Chelsea forward Mutu.

"He had a great game [against Genoa], enhanced by the goal," Beretta told reporters.

Juve look set to be without centre-back Leonardo Bonucci because of a broken nose as the defence try to shackle Mutu but the sight of the Romanian will remind Antonio Conte's team how far they have come since the dark days of 2006.

Few Juve fans expected a full-on assault on the Serie A title this term after two seasons of woe but the arrival of hard-nosed former midfielder Conte as coach and the patchy form of other sides has opened the door to a scudetto challenge.

To everyone's surprise, they are unbeaten in the league and are flying high thanks in part to midfielder Andrea Pirlo rediscovering the form he showed in his best years at Milan.

Juve defender Giorgio Chiellini knows a sixth straight win is not a foregone conclusion at Cesena.

"We'll play on a synthetic pitch against a team which will have the chance to write an important page of their history, seeing that we're unbeaten. Therefore we must pay the utmost attention," he said.

Champions Milan come up against a Genoa side who had ambitions of Europe in August but now lie two points above the drop zone despite boasting ex-Milan striker Alberto Gilardino.

Milan forward Antonio Cassano will again hope for a run out as he gets back to full fitness after five months out following a heart problem, with a spot in Italy's Euro 2012 squad in mind.

A number of injuries could give Cassano his chance.

City rivals Inter Milan, in seventh, are suddenly back in the picture for a Champions League play-off berth after Wednesday's 2-1 win over Siena put them six points behind third-placed Lazio.

Andrea Stramaccioni's side have won two and drawn one since the former youth coach took over from Claudio Ranieri and Inter next visit fourth-placed Udinese on Saturday.

Lazio travel to second-bottom Novara on Sunday while AS Roma in fifth host struggling Fiorentina and sixth-placed Napoli, in awful form, go to third-