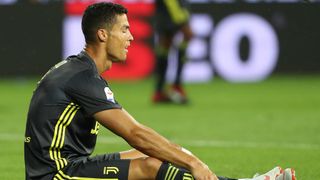 Blaise Matuidi insisted Juventus will help Cristiano Ronaldo open his Serie A account after the superstar fired another blank for the Italian champions.

Ronaldo has experienced a barren start to life in Serie A following his blockbuster arrival from Real Madrid, the five-time Ballon d'Or winner scoreless in Juve's 2-1 win at Parma on Saturday.

The 33-year-old forward tallied eight shots against Parma without finding the back of the net but Matuidi – who scored the winner – believes Ronaldo will break his duck.

"He is a great player and will score eventually, as he's very important for this team," Matuidi told DAZN.

"He was unlucky this evening, but we will help him and he's got plenty of time.

"He was a little annoyed at not being able to score, but it'll come."

Douglas Costa, who came off the bench for his 50th Juve appearance, added: "Cristiano is playing in a new league and understandably he wants to score but he also knows it's the three points that matter most."