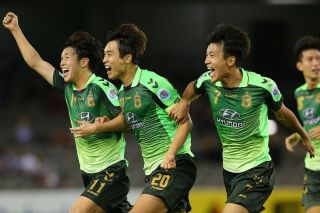 One of Jeonnam or Jeonbuk look set to lose ground on leaders Pohang Steelers, who travel to Seoul on Sunday.

The Steelers are two points clear of three teams through eight matches this league campaign in what is a congested top half of the table.

The Dragons will look to capitalise on a potentially tired Jeonbuk side, who suffered a 2-1 loss at Yokohama F Marinos in the AFC Champions League on Tuesday.

Macedonian striker Stevica Ristic, who has scored twice for the Dragons this season, comes up against one of his former teams.

Ristic has netted regularly for most clubs he has been with, including Jeonbuk from 2007 to 2009, and shapes as being a threat once again.

Lee Jong-Ho and Ahn Yong-Woo have both netted three goals each for the Dragons this season.

Choi Kang-Hee's Jeonbuk side have won just one of their past four matches in all competitions and need an improvement on their recent form.

Jeonbuk need more from veteran striker Lee Dong-Gook, who scored 13 goals last season, but has just two in eight games in the K-League this campaign.

Elsewhere, second-bottom Seoul – champions in 2010 and 2012 – desperately need to turn their form around when they host Pohang.

In Kim Seung-Dae, the Steelers have one of the competition's equal top goalscorers with five.

The 23-year-old has netted in each of his past five matches in all competitions to be one of the form strikers in the K-League.

Ulsan will be aiming to end a three-game winless run when they host third-placed Suwon Bluewings on Saturday.

Incheon United are still searching for their opening victory of the campaign as they visit Jeju United.

Seongnam or Busan I'Park could close in on the top six with a win in their clash on Saturday, while strugglers Gyeongnam and Sangju Seongnam do battle.