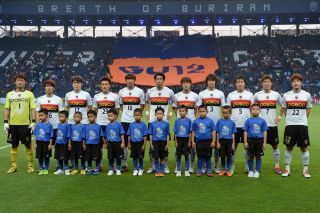 The Steelers have won five and drawn two of their last seven matches in all competitions, extending that record when they secured a 3-0 home victory over Gyeongnam on Wednesday.

Ulsan's midweek 1-0 home defeat to Seongnam ensured a three-way tie on 13 points at the top of the table, with Cho Min-Kook's pacesetters heading things on goal difference from Steelers and Jeju.

The second and third-placed sides meet in the stand-out clash of the weekend at Steelyard Stadium, with Jeju heading into the game on the back of a 2-0 midweek win over Jeonbuk Motors.

Ulsan, meanwhile, will be eager to get back on track after their winless run was extended to three games in midweek when they return to action.

Last year's runners-up won their first three games of the season, but they have suffered a dip in form of late.

Jeonbuk Motors - who occupy fifth place - are sure to test their resolve even further.

Incheon United have endured a poor start to the K-League campaign and are now the only team without a win as they prepare to host Suwon Bluewings on Sunday.

The Bluewings go into the game buoyed by a 1-0 home win over Jeonnam Dragons, with Yeom Ki-Hun notching the only goal of the game from the penalty spot late on.

Seoul are another side who have not got going in the first seven games and they will see Saturday's home encounter with Gyeongnam as an opportunity to kick-start their campaign.

Elsewhere, Sangju Sangmu travel to Seongnam and Jeonnam Dragons host Busan I'Park in the other games to be played on Sunday.