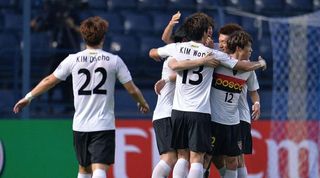 Leaders Pohang Steelers and Jeonnam Dragons may be both owned by steel giants POSCO, but they own wildly contrasting K-League records.

Defending champions Pohang are chasing a sixth crown – only Seongnam have won more – while Jeonnam have never lifted the trophy.

The Dragons did, nevertheless, boast the better head-to-head statistics for years, but the Steelers' ongoing nine-match unbeaten run against their rivals means they have the form book on their side.

Jeonnam will look to 22-year-old forward Lee Jong-ho, who is known as 'The Gwangyang Rooney' and has scored four times in his last six appearances, to help them leapfrog above their opponents on Saturday.

Pohang won 2-1 against Jeonbuk Motors in the last 16 of the AFC Champions League in midweek and, ahead of the return leg, coach Hwang Sun-hong is expected to rest some key players.

Goals are to be expected in Pohang, with the last four editions of the 'Steel Derby' in all competitions producing 19 in total.

Jeonbuk, in second, are also likely to rest players ahead of their continental showdown in Pohang next Tuesday.

Choi Kang-hee's team entertain rock-bottom Incheon United, who scored their first goal in 10 matches – and got their first win of the league season – last time out.

Fourth-placed Jeju United, who have taken seven points from a possible last nine, are away to a Gyeongnam side seeking to end an eight-game winless run in all competitions.

The spotlight will be on in-form Jeju midfielder Yoon Bit-garam, who returns to the club at which he started his career.

Suwon Bluewings, for whom Brazilian playmaker Santos Junior and North Korea striker Jong Tae-se have been shining, could go as high as second if they win at struggling Sangju Sangmu.

The remaining matches of the round take place on Sunday.

Busan I Park's Lee Beom-young and Ulsan's Kim Seung-gyu were both superb as the mid-table teams drew 0-0 last month, and the goalkeepers will resume their personal duel for places in South Korea's FIFA World Cup squad.

Finally, Seoul and Seongnam, who have finished K-League winners or runners-up an unparalleled 10 times apiece, collide.

The sides have scored only six goals each in 11 outings thus far, though Seongnam have conceded the fewest goals in the division and have won back-to-back games since Lee Sang-yoon took charge and restored Uzbekistan icon Server Djeparov to the starting XI.