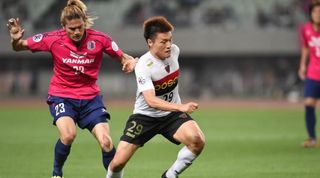 Lee Myung-Ju put the Steelers ahead in the first half against Jeonnam Dragons with his fifth league goal of the season before Kang Su-Il doubled the advantage seven minutes after the break.

Hyun Young-Min pulled one back for the visitors in the 65th minute, but Kim Seung-Dae made absolutely sure of the three points deep into stoppage time.

And the result sees the league leaders put daylight between themselves and second-placed Jeonbuk Motors, who were held to a 1-1 draw at home to basement club Incheon United.

Maximum points looked to be heading to the home side at Jeonju World Cup Stadium after Lee Dong-Gook's 47th-minute effort, but Cho Soo-Chul struck at the death to earn an unlikely point.

The division's top two are set to lock horns in the second leg of their AFC Champions League last-16 clash on Tuesday, with the Steelers currently holding a 2-1 advantage.

Jeju United are third on goal difference after they failed to capitalise on Jeonbuk's dropped points in a 1-1 draw at Gyeongnam.

Elsewhere, Suwon Bluewings extended the gap between top half and bottom half by picking up a 1-1 draw at Sangju Sangmu.

The result lifted them a point further clear of seventh-placed Busan I'Park, who were on the receiving end of a 3-0 defeat at Ulsan.

After going ahead through Kim Yong-Tae in the 10th minute, An Jin-Beom and Han Sang-Woon put the result beyond doubt in the second half.

Ulsan had previously gone six K-League games without a win and climb to fifth with this victory.