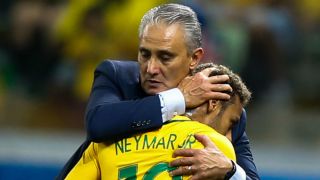 Tite remains the man to lead Brazil towards World Cup glory in 2022 despite suffering a quarter-final exit at Russia 2018, according to former Selecao great Kaka.

Brazil were favourites to collect an unprecedented sixth world title but ran aground against Belgium in a thrilling clash in Kazan, with a goal from substitute Renato Augusto unable to undo the damage caused by Fernandinho's first-half own goal and a superb strike by Kevin De Bruyne.

Kaka accepts expectations in his homeland are such that Tite and his squad are unlikely to be celebrated for their efforts but, following a dominant qualification campaign to reach Russia, the ex-AC Milan star believes things are on the right track.

"In Brazil it is always a failure not to reach the final," Kaka, speaking courtesy of Adidas, told Omnisport.

"But I like to look at the positive side and the good things that happened. I believe we made an excellent World Cup – specifically, the game against Belgium in the quarter-finals was a great match.

"The technical level was very high. A tactical lesson from both coaches. They understood the game [and] made changes in strategy.

"And then there are [unfortunate] things in the game. Thiago Silva's ball hits the bar and goes out, [Vincent] Kompany's ball hits Fernandinho and goes in.

"Brazil have some defects, some things to be corrected. If Tite continues as the coach, he will be able to make the adjustments until 2022. I believe that the Selecao did a good World Cup."

Brazil are next in action when they face United States in a friendly at MetLife Stadium in New Jersey on September 7.