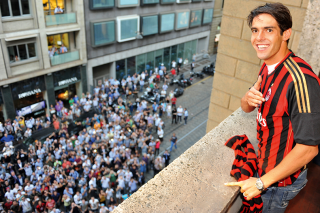 The Blues, recently acquired by Sheikh Mansour and looking to make a splash, had seen their sensational bid for the Brazilian accepted by Milan in January 2009.

And the Samba star admits that personal terms had reached the point where signing on the dotted line was all that separated him from becoming a City player.

Speaking in the November 2017 issue of FourFourTwo, Kaka says: “Negotiations went very far indeed. The only thing separating City and I was my final word.

“It came to the point where all of the numbers and the finer details had been discussed. The wages I had been offered were much, much higher than what I was earning with Milan. I found myself wondering what my life playing in England would be like, what my routine at this new club would be, how difficult it would be for my kids and my wife to move home. All of these thoughts were swirling inside my head.”

However, Kaka explains that the timing of the move, coupled with his concerns about City's ambitious project to become a superpower, convinced him to stay put.

“I’d absolutely no idea that City were interested in signing me until they’d actually made their official offer to Milan," he says. "They had gone straight to Milan."

“I came to the conclusion that it was not quite the right time for me to go to City, and the main reason was the uncertainty over the squad-building process.

“It wasn’t clear to me how the squad would be reshaped and I wasn’t convinced it would work. I was being asked to swap one of the most historic and successful clubs in Europe for a team who were only at the beginning of a new project, where I was supposed to be the first big player. It was safer to stay at Milan.”

Read the full interview with Kaka in the November 2017 issue of FourFourTwo magazine, which focuses on Zinedine Zidane's quest for domination after leading Real Madrid to back-to-back Champions League triumphs. Also this month, we go behind the scenes at the FIFA Interactive World Cup to find out just how serious video games have got, speak to Huddersfield manager David Wagner about the Terriers' miraculous return to the top flight, learn about the evolution of fan tribes, visit Ireland to watch a Scottish cup tie, go One-on-One with Edwin van der Sar, and get clued up about Expected Goals. Order a copy today here, and then subscribe!