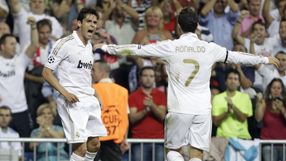 The 29-year-old Brazil playmaker has mostly been a shadow of the man who won the World Player of the Year award in 2007 since he joined from AC Milan at the end of the 2008/09 season for a fee of almost 70 million euros.

He has suffered a series of injuries and needed knee surgery after last year's World Cup but his match-winning performance against Ajax, when he scored the second goal and had a hand in the other two, suggested he is getting back to his best.

The boyish grin has returned to his face and he was given a rousing ovation by the Bernabeu faithful when he was substituted with around 15 minutes left as Real made it two wins from two in Europe's elite club competition this season.

"He has had a really bad time," Mourinho's assistant Aitor Karanka, standing in for his suspended boss, told a news conference.

"For those of us who have kept faith in him, seeing the look of happiness he has had on his face for a while now is very satisfying," he added.

"A great player like him, and considering what he has been through, deserves to be happy again."

Before Tuesday, Kaka had shown glimpses of his old self in pre-season games and in the first few rounds of La Liga and he scored the fifth goal in their 6-0 drubbing of Real Zaragoza on the opening weekend of the Spanish domestic season.

Up to now, Mourinho has generally picked Germany playmaker Mesut Ozil ahead of the Brazilian and there were unsourced reports Kaka was set to leave Real in the close season for around half what he cost the Spanish giants.

Real captain Iker Casillas said the team were thrilled that he appeared to have turned a corner.

"We know what a class player and person he is and we have faith in him," the Spain goalkeeper told reporters after the Ajax game.

"He is committed to himself, to his team mates and to the team," he added.

"We want him to be what he was before but we know what the press is like. If he has a less-brilliant match he'll be criticised again."