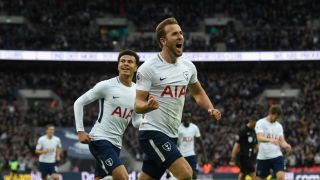 Harry Kane is back in the Tottenham starting line-up to face West Ham at Wembley in the Premier League.

England striker Kane wrapped up a sensation 2017 by breaking Alan Shearer's Premier League record for the most goals in a calendar year and outscored Barcelona superstar Lionel Messi over the 12-month period for club and country.

But the 24-year-old was recently laid low by illness and could only feature as a second-half substitute in the 2-0 win at Swansea City.

Fernando Llorente scored the opener against his former club, but returns to the bench to accommodate Kane - one of three changes made by Spurs boss Mauricio Pochettino, with Serge Aurier and Moussa Sissoko in for Kieran Trippier and Erik Lamela, both of whom join Llorente among the substitutes.

West Ham boss David Moyes also makes a trio of alterations, with Andy Carroll on the bench despite his match-winning brace against West Brom last time out.

Forward Marko Arnautovic and left-back Aaron Cresswell are sidelined by suspected hamstring and back complaints respectively.

Tottenham were 3-2 winners when the sides met at London Stadium earlier this season, with Kane scoring twice, but West Ham prevailed by the same scoreline at Wembley in an October EFL Cup tie.