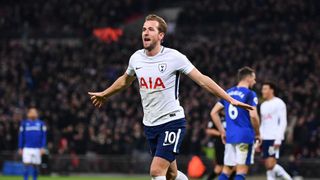 Harry Kane has left another record in his wake by becoming Tottenham's highest scorer in the Premier League.

England striker Kane rounded off a stellar 2017 by breaking Alan Shearer's record for the most Premier League goals in a calendar year and outscored Barcelona and Argentina superstar Lionel Messi for club and country over the 12-month period.

Kane has picked up where he left off in 2018, netting a brace against AFC Wimbledon in the FA Cup before another double against Everton at Wembley on Saturday took him past Teddy Sheringham's previous Premier League best for Spurs.

Sherringham netted 97 in the top flight for Tottenham across two spells, placing him ahead of Robbie Keane and Jermain Defoe on 91.

Kane is now on to 98, having punished Everton twice after half-time, with Son Heung-min and Christian Eriksen also on target to put Mauricio Pochettino's men on course for a dominant 4-0 win.

The 24-year-old now has 20 Premier League goals this term and 28 in all competitions.