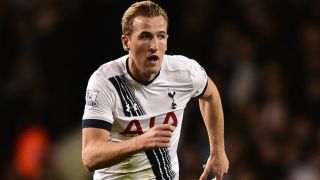 The England international, 22, has followed up his 31-goal haul of last season with 14 strikes so far in 2015-16, prompting speculation linking him with a move to Manchester United or Real Madrid.

But Kane reiterated on Monday that he saw his long-term future at Tottenham, which thrilled Pochettino.

"In football anything can happen, but Harry is very happy with us. We are really happy and very pleased he is with us.

"There have been a lot of rumours about us from the beginning of the season. Our supporters need to understand we are in a project that is different from other clubs."

Spurs continue to be linked with signing a second striker who can ease the workload on Kane, but Pochettino does not think that is a necessity and will only buy an ideally suited frontman.

He added: "It is maybe true that Harry Kane is a proper striker, but it is not only him - we have different players in the second line who can help him and also play in his position.

"The most important thing is to add the right profile and right player. Trying to find this player is not easy.

"The market is very difficult in winter and our power is in the changing room, in the squad, the team. It is not about one name, one player more or less.

"It is important to find the right player who can help us. That player will come, but if he doesn't it's not a big worry for me.

"I can understand people are concerned we need one striker more, but we are very confident in following the same direction as the first half of the season."