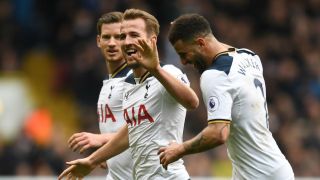 Harry Kane expects Tottenham's "family" to stay together next season and says there are few better clubs in the world to play for.

That was enough to guarantee Mauricio Pochettino's side second place in the Premier League and a spot in the Champions League group stage.

For the second season running Spurs have been in the title picture, but the likes of Dele Alli, Toby Alderweireld and Kyle Walker are among several of the club's top stars to have been linked with big-money moves away.

However, Kane does not expect an exodus at a club he believes are still on the up.

"We're a family on and off the pitch. We work so hard as a group and the staff, the manager... look, there's not many better teams to be at around the world at the moment," he said.

"We've got a very bright future, a great squad, a team that's hungry to win and to learn and to get better.

"Of course, there are going to be rumours over the summer, but I think I'd be very surprised if most of us aren't still here next season."

Kane was delighted to score on White Hart Lane's send off but says the team must now look to push on and secure more special moments by winning trophies.

"It is sad to see White Hart Lane go, it has been an amazing stadium for us - especially this season, being unbeaten," he added.

"But we're going into bigger and better things, and the new stadium is going to be unbelievable.

"That's got to be the next step, lifting the trophy and having celebrations like that but with a title or a cup.

"It was special out there after the final match, but imagine what it would be like winning a Premier League, or winning an FA Cup or a Champions League or something."