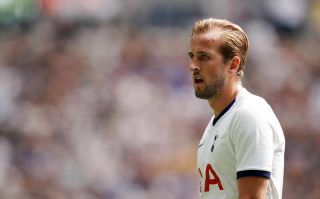 Tottenham striker Harry Kane is keen to add to his north London derby highlights reel this weekend by helping to deliver another victory on Sunday.

The 26-year-old has a fine goalscoring record against Arsenal, bagging nine goals in nine games and needs just one more to become joint top scorer in the history of the famous rivalry alongside Emmanuel Adebayor and Bobby Smith.

Some of Kane’s most memorable moments in a Spurs shirt have been against the Gunners, notably his double to earn a 2-1 win in his first taste of the derby back in 2015.

Although the England captain has a fine personal record against the Gunners, it is the wins he celebrates the most and wants to get a taste again when Mauricio Pochettino’s men visit the Emirates Stadium.

“My first-ever game against them was the biggest highlight,” he told PA after attending McDonald’s Football Fun Session.

“White Hart Lane, being 1-0 down, and scoring two in the second half and the header in the 89th minute.

“To do that and win the game made it more special.

“The goal at White Hart Lane when I cut in off the flank and bent it in was a very special moment in terms of the atmosphere. I’d never heard White Hart Lane that loud and that energetic.

“But the most important memories are the wins. Whenever we can beat them that’s always the highlight.”

Spurs have not won in the league at the Emirates since 2010, even though Kane has scored three goals in four games there, and will be sure of a hostile reception at the weekend.

Last season’s Premier League fixture was a volatile affair that saw Pochettino race down the touchline to break up a 22-man melee after Eric Dier’s goal and ended in a 4-2 defeat.

But Kane reckons making the trip across north London is the perfect game for Spurs after their disappointing defeat to Newcastle last weekend.

“I can’t wait,” he added. “The Arsenal game is always one of the biggest games of our season – for the fans and the club.

“It’s an exciting game and a great game to bounce back from after the disappointment of Newcastle.

“If we win on Sunday it will put everyone back into a good feeling and gives us good momentum before the international break.

“We know it’s going to be tough because Arsenal are a very good team, especially at home, but we’ve had a good week of training and there’s nothing like a north London derby for us.

“They beat us in the league and then we beat them in the cup a couple of weeks later at their ground (in the Carabao Cup).

“It’s always going to be back and forth. Two good teams playing at high levels.

“It’s important we win for the fans and they can have those bragging rights as well.

“There’s a lot of important games throughout the season but the derby feels a little bit more special. We’ve got to make sure we give it everything and come out on top.”