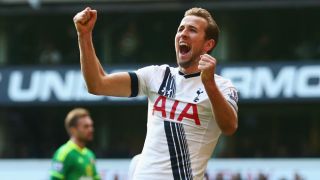 Tottenham head coach Mauricio Pochettino has ruled out signing another striker, saying Harry Kane is good enough to score goals on his own.

The Argentine said if he was to sign another striker to support Kane, he would have to be the right fit for the squad for fear of disrupting what is a strong team unit.

Kane scored 31 goals in all competitions last season and has another 15 in 29 appearances this time around.

Pochettino, speaking after his side's 2-0 FA Cup third round replay win over Leicester City, said: "[Kane is] one of the best strikers in the world.

"If we get another offensive player we need to bring the right one, who will fight for us.

"Because if you take the wrong decision, maybe you break the balance in the squad and changing room."

For that reason, Pochettino said there would be few candidates he would be willing to approach about coming to White Hart Lane.

"We are proud of the changing room that we have built, and their performances and how they believe in how they play," he added.

"Games like this show me that we are going the right way and have taken the right decisions in the past.

"I can understand that when you don’t score people can be worried, but we have enough quality.

"We can improve, yes, and if we find the right player, then okay. But if not, I am very happy with the squad that we have."

Tottenham will now take on Colchester United in the fourth round of the FA Cup, but not before resuming Premier League duties with a tricky trip to Crystal Palace on Saturday.