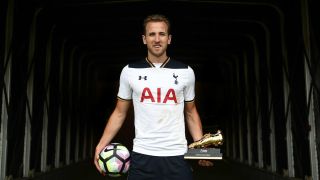 Kane finished as the top scorer in the English top flight for the second season in succession, blowing away the competition during the final week of the campaign.

The England international struck four goals in Spurs' 6-1 demolition of Leicester City last Thursday before netting another hat-trick as relegated Hull City were put to the sword 7-1 on Sunday.

Kane also broke through the 20-goal barrier for a third consecutive season, having long since put assertions that his 2014-15 efforts marked him out as a "one-season wonder" to bed.

The 23-year-old made reference to those who doubted his prowess on the back of forgettable early-career loan spells with Leyton Orient, Millwall, Norwich City and Leicester by posting on Twitter and Instagram: "One-season wonder. Again, and again."

The Spurs star rounded off the post with 29 football emojis, having struck 29 times in 30 Premier League games this term.

One man delighted by Kane's continued goalscoring prowess is world tennis number one Andy Murray, who credited the 23-year-old's purple patch of form with helping him to get the better of brother Jamie in fantasy football this season.

In an Instagram post, Murray said: "Our fantasy football league came down to the last day of the season between me and Bro.

"Thanks to @harrykane for helping me to pip my big Bro @jamie_Murray at the finish #pip #braggingrights."