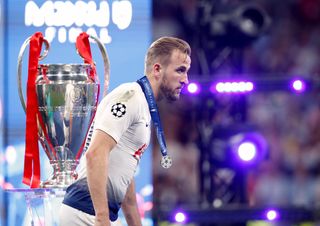 Jose Mourinho insists Harry Kane was right to play in last season’s Champions League final for Tottenham but will not be rushing him back from his latest injury.

Kane was handed a starting spot in the Madrid showpiece against Liverpool last June in what was his first appearance since damaging ankle ligaments in April.

The striker was well off the pace – and continued to be in the summer’s UEFA Nations League finals – and the consensus was that he came back too soon.

Mourinho, who has won the Champions League twice as a manager, said Kane was within his rights to play in the biggest game in club football even if he wasn’t fully fit.

Mourinho said: “I would play only with one leg if I was a player and I was playing in a Champions League final. With crutches.

“There are some matches where protocols mean nothing, nothing.

“So if that was the case, I think it isn’t the case to blame Harry or medical departments.

“That is just the nature of the way football is.”

Mourinho now finds himself in the same position as predecessor Mauricio Pochettino as Kane’s recovery from a hamstring operation in January is ahead of schedule.

Having previously been worried that he may not play again this term, Mourinho has now said the England captain could be fit for the final five games of the season.

Kane is constantly defying medical opinion on his recovery from injuries and will be hoping to return to action as soon as he can.

But Mourinho is not prepared to push Kane and says Spurs will be realistic about a possible return.

“That is what we are going to be,” he said. “Tottenham doesn’t finish, doesn’t end in May.

“There is going to be Tottenham for many, many years so we would never risk Harry in a difficult situation, no chance.

“He is going to be back when he is ready to be back.”

Kane’s two-month absence – accompanied by the injury to Son Heung-min – has again highlighted just how reliant Spurs are on their record Premier League goalscorer.

Mourinho is currently left with wingers Steven Bergwijn and Lucas Moura and midfielder Dele Alli as choices for a false nine and he is determined to ensure such a situation does not occur again.

“Another striker to compete with Kane is not easy. It is very difficult,” he said.

“Our squad even without a number two for Kane is a squad that can answer problems. Last season when Harry was injured the squad managed to answer.

“OK, I know (Fernando) Llorente played some matches, but they had Son, they had (Erik) Lamela, they had (Moussa) Sissoko, they had Lucas.

“If it was Kane, a left-back and a right-back, our problems will not be of this dimension.

“But we look for next season to make a better squad than we have, a squad with more balance, a squad that can answer to these unpredictable things that can happen.”