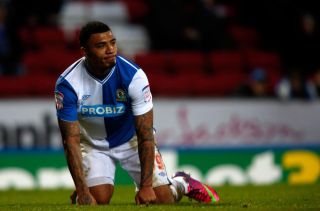 Brighton magistrates court found the 27-year-old striker, who was on loan at Blackburn Rovers at the time, guilty of using abusive or insulting behaviour and fined him £750.

Kazim-Richards made the gesture during a Championship clash at the AMEX Stadium in February.

He denied the charge, reportedly telling the court that he was "having a bit of banter" with the opposition fans.

The court also heard that Kazim-Richards had been subjected to chants from the Brighton fans prior to the incident.

Kazim-Richards scored three league goals during his loan spell at Ewood Park, and was transferred to Bursaspor from Galatasaray at the start of the current campaign.

Bursaspor are 11th in the Turkish Super Lig, with Kazim-Richards - who made his debut at international level for Turkey in 2007 - yet to score in 16 league appearances.