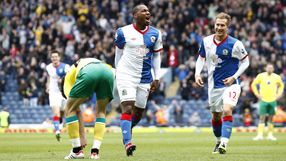 It’s been a difficult season for Kean and Blackburn, currently second-from-bottom in the Premier League, but the club's development of younger players is something that has delighted the Scot.

"We've got a great club. We've got a quick emergence of some fantastic young players," he told Yahoo!

"Unfortunately we lost Phil Jones to Manchester United, but this season we've had Marcus Olsson come into the club, we've got his brother Martin Olsson, we've got Junior Hoilett, Jason Lowe, Grant Hanley, Adam Henley - a number of young players that have come through our academy.

"I think that is going to be the future for us, making sure that we can develop our own players together with some core players of a good type, which we’ve got a lot of," said Kean.

Rovers sold Jones to United for a reported £16.5 million last summer, but Kean wants their next young star, Hoilett, to stay put.

Hoilett has been the standout performer in an otherwise miserable season for Blackburn, scoring seven goals in 31 league appearances.

As a result, the 21-year-old has attracted interest from a host of Premier League clubs, including Arsenal, Tottenham Hotspur, Liverpool, Newcastle United, Bolton Wanderers and even Bayern Munich.

"It's got to be down to timing. I would imagine he would have lots of offers, but I think people can see that the way he's playing that he's happy with his football; he's playing out of his skin and he's very comfortable in the group.

"I'm hopeful that we'll get the points that are required to keep us in the division and then can sit down with Junior and his father to hopefully thrash out a contract that will continue to see him play for Blackburn Rovers."