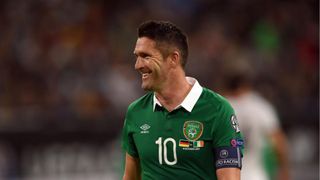 Republic of Ireland captain Robbie Keane has announced he will retire from international football following next Wednesday's friendly against Oman in Dublin.

Keane has scored 67 goals in 145 games for the Republic after making his debut against the Czech Republic in March 1998.

The 36-year-old intends to carry on playing for club side LA Galaxy for a "few more seasons".

In a statement released to media outlets in Ireland, Keane said: "I am announcing my decision to retire from International football following the upcoming game with Oman on August 31 in the Aviva Stadium.

"It has been a wonderful journey for me to have played with the Irish national team for over 18 years since I made my senior international debut back in 1998. I have enjoyed it all.

"It has also been a great honour, for both me and my family, to have been given the opportunity to captain my country for over 10 years.

"As a young boy growing up in Dublin playing football on the street I could never have imagined the path my life would take – it has exceeded my wildest expectations.

"I have been extremely lucky to have had the opportunity to play for and captain my country – it was my ultimate goal all those years ago and it has been, by far, my greatest achievement."

He appeared in the first of three major international tournaments at the 2002 World Cup in Japan and South Korea, where a dramatic injury-time equaliser to secure a 1-1 draw for Mick McCarthy's side against eventual finalists Germany still stands as a career highlight.

"I have grown up playing for Ireland and look back at the 17-year-old kid making his international debut, taken under the wing of Mick McCarthy and the FAI [Football Association of Ireland], and think of the person I am today and realise how playing for Ireland has been such a huge influence in my life.

"I have so many fantastic memories of days with the Irish team and have made so many friends both on and off the pitch over this time.

"I have been very fortunate to play at major tournaments for Ireland over the years and I will cherish all of those memories but one in particular stands out – the 2002 World Cup and scoring the late goal in Ibaraki, Japan against Oliver Kahn.

"The atmosphere, the adrenaline and the buzz from the fans that night is something I will always remember."

Two years on from that memorable night, Keane usurped the man who set up his goal – Niall Quinn – as the Republic's all-time record goalscorer with a brace against Faroe Islands in 2004.

He stands as the top-scoring active player in international football and, having become the fourth Irishman to bring up 100 caps in the first game at the redeveloped Aviva Stadium versus Argentina in August 2010, he concedes next month's curtain call will be an emotional one.

"I  had always hoped this day would never come and I will miss putting on the Ireland jersey and walking out to a sea of green but I am looking forward to the game against Oman and putting on the jersey and singing the national anthem one last time in front of the home crowd at the Aviva," Keane added.

"It will be an emotional night for me, but I will savour each and every last moment."

Keane was part of the Ireland squad that reached the last 16 at this year's European Championship, with Martin O'Neill's side beaten by eventual runners-up France.