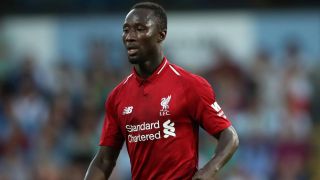 Naby Keita rejected interest from Barcelona and Bayern Munich to link up with Jurgen Klopp at Liverpool.

Keita completed his move from Bundesliga outfit RB Leipzig to Liverpool in the off-season after the Premier League giants struck a deal last term, reportedly worth £50million.

The 23-year-old Guinea star is set to form a formidable midfield alongside the likes of fellow new signing Fabinho, and captain Jordan Henderson.

And Keita revealed he turned down LaLiga champions Barca and Bundesliga holders Bayern to end up with the Champions League finalists at Anfield.

"It's true to say that there were other teams involved like the ones you mentioned," Keita said via the Guardian and Telegraph. "But a big part of my decision was the role of the coach.

"We had good conversations. The words he spoke to me about this project really convinced me. I could see how the club was developing and I spoke at length with Sadio [Mane].

"Sadio is like a brother to me. We had nine months together at Salzburg and built up a good rapport. We have been great friends since that time. He told me what a great club this was and how the team was progressing and had great potential."

Keita added: "I don't think the physical aspect is going to have a negative impact on me at all.

"I have watched a lot of English football and through the process of the friendly games leading up to the new season, I'll adjust to it. I like winning the ball back. It’s something I love.

"I am someone who has this real winning mentality. I have a huge desire to win. That is why I am aggressive in a positive sense on the field.

"My first mind-set when I am out on the field is to defend well and not concede. As a midfielder, when you have sealed things up at the back, my job is to provide the ammunition for the strikers and forwards, to create opportunities for them.

"Also, if I get a chance that come(s) my way, I want to take it and score. But I am a team player. I think about the team and the group first always."