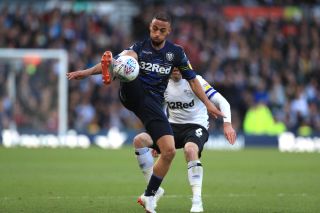 Leeds have been dealt an injury blow as Kemar Roofe has been ruled out of the return leg of their Sky Bet Championship play-off semi-final against Derby.

Roofe’s 15th goal of the season secured Leeds a 1-0 win on Saturday at Pride Park in the first leg, but he will play no part at Elland Road on Wednesday due to a calf strain.

Patrick Bamford is expected to start in Roofe’s absence after serving a two-game ban, while Pontus Jansson remains doubtful and Adam Forshaw, Tyler Roberts, Barry Douglas and Gjanni Alioski are definitely out.

“Forshaw won’t be available,” Bielsa said. “Jansson will (on Tuesday) try to work normally. And we will see how he is.

Bielsa hopes his players can feed off what is expected to be an electric atmosphere at a sold-out Elland Road.

“The emotion is an ingredient that allows you to use your skills better,” said Bielsa. “This is something normal, natural and we want to play the game in these conditions.

“We know that there is a long path to reach our goal together. We just played the first part of the duel and we have the second part to play now.

“The difference is only one goal and the idea is to increase this difference and prevent the opponent from reducing it.

“We know that this is a difficult task and as difficult as it was for the first game.”

Bielsa said he could not ask any more of Leeds’ fans, but expects them to play a significant role on Wednesday night.

“The importance of Leeds’ fans in the behaviour of the team has been shown in many moments when our team faced adversity and overcame adversity thanks to the support of fans,” he said.

“And the fans do that without needing to receive any message from us. What makes Leeds fans special is they don’t answer to things that you ask them to do.

“It’s not when you ask them to do something, they do it, they don’t need to be asked to do things.

“That’s why I have nothing to ask them, they always give us what we need.”

Roofe’s 55th-minute breakthrough at Pride Park edged Leeds closer to the Wembley final as they bid to reach the Premier League after a 15-year absence.

“It’s two games but actually we could say it’s just one game and we have played the first half of it. And usually you don’t make comments at half-time,” Bielsa added.