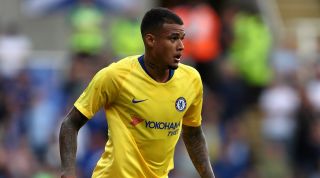 Kenedy wants to leave Chelsea permanently before the European transfer window closes on September 2, according to Goal.

The Brazilian spent last season and half of the 2017/18 campaign on loan at Newcastle, but the Magpies opted against signing him this summer.

Kenedy was named among the substitutes when Chelsea faced Manchester United on the opening weekend, but he did not make the matchday squad for last Sunday's 2-2 draw with Leicester.

And fearing that he is not in Frank Lampard's plans for 2019/20, Kenedy is now exploring the possibility of leaving the club in the next fortnight.

However, Chelsea would prefer to extend the winger's contract - his current deal expires next summer - and then loan him out.

That is the approach they took with Davide Zappacosta, who penned fresh terms with Chelsea before agreeing a temporary switch to Roma this week.