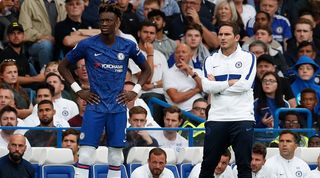 For 25 minutes at Stamford Bridge on Sunday, Chelsea were superb. They pressed aggressively and as a collective, swarming Leicester City in a surprise 4-3-3 with Mason Mount and N’Golo Kante excelling in tandem No.8 roles. The comparisons to Manchester City, not least in how David Silva and Kevin De Bruyne are deployed, were obvious and justified – until the system collapsed, that is.

The secret at the heart of Pep Guardiola’s Manchester City is the illusion of freedom. What looks like improvisation is in fact the result of meticulous positional coaching; what seems like individual creativity is actually an automated response etched into muscle memory. Their possession is not just about ball retention, but perfect balance and shape. If the ball is lost, then anyone and everyone is ready to block the counter-attack and suffocate the opposition. City are, as Guardiola is so often at pains to point out, a defensive team as much as they are an attacking one.

Frank Lampard has not explicitly cited Guardiola as a tactical influence, but the Chelsea manager’s fundamental approach – hard pressing, a high line, quick interchanges in the half-spaces – is undoubtedly influenced by the City manager. But while the basic scaffolding is similar, Lampard does not appear to have seen through the illusion at City three games into reign. His Chelsea players are imaginative and free. Manchester City are not.

When Jose Mourinho criticised Chelsea’s lack of compression between the lines on the opening weekend of the Premier League season, he was not condemning the concept of expansive football. Compactness is an essential element of modern football, whether parking the bus or attempting to camp on the edge of the opposition area. It's the only way to control possession and to ensure there are no gaping holes in central midfield. At Old Trafford, it was Chelsea’s decompressed formation that allowed Marcus Rashford to twice glide through the middle for Manchester United’s second and third goals.

Things improved against Liverpool in the Super Cup because Lampard dramatically altered his side’s tactical approach, instructing his players to sit behind the ball. They succeeded in stifling the game against Jurgen Klopp’s team, and while Lampard’s tactical flexibility is good news, sitting off the opponent is – in terms of defensive coaching – the easy bit. Much harder is organising your expansive attacking shape into one capable of preventing breakaways and maintaining pressure on the goal.

After that initial rush against Leicester, Chelsea were even more porous than at Old Trafford. Once Brendan Rodgers told James Maddison and Ayoze Perez to come infield in the second half, having floated wide in the first, the Blues were suddenly all at sea. Spread across the width of the pitch and empty in midfield – at times making an extraordinary square shape around the Foxes – Lampard’s side were evidently playing with genuine creative freedom. Those assuming the problem was in midfield – namely with Jorginho’s defensive shortcomings – have misinterpreted a system problem as an individual one. You could clone Kante to play at the base of midfield and the issue would have been the same.

In fairness to Lampard, these are very early days. Even Guardiola needed 12 months of erratic football before his ideas were adequately absorbed by Manchester City players. But whereas Guardiola’s obsession with tactics prompts him to accuse his players of being “sloppy” in a 5-0 FA Cup final win, or “incredible” in a 1-0 victory at Bournemouth, the Chelsea manager spoke mainly of holding onto the ball better in his post-match interview on Sunday. He blamed “personality moments” for Leicester getting back into the game, and said his side needed to “move the ball better” to wrestle back control. It was an interview that focused on momentum shifts, not tactical systems.

Perhaps Lampard simply needs more time for his players to unlearn Maurizio Sarri’s methodical build-ups and digest his own assertive demands. Then again, Sarri’s tactics were prosaic for a reason; he clipped his players' wings to ensure greater control, both in attack and defence. The Italian was training them to avoid precisely the kind of situations that have unzipped Chelsea so far this season.

Lampard doesn’t necessarily need to slow things down like Sarri, and he certainly doesn’t need to drop deep like Mourinho. But for bold attacking football to work in the Premier League, you cannot allow your midfielders and forwards to fan out across the entire width of the pitch. The players can look like they’ve been unleashed, but they shouldn’t actually be free.

QUIZ! Can you name every team-mate Andy Carroll played with at Liverpool?