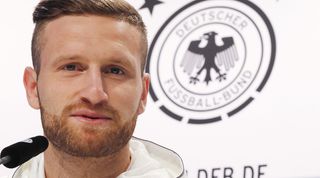 Leadership was something the Gunners were never short of during Keown’s time at the club. It’s 12 years since the central defender departed Highbury, and 12 years since Arsenal last won the Premier League.

It is leadership that Keown believes Arsene Wenger will now need from Mustafi – behind only David Luiz and John Stones in the list of the most expensive defenders in history – if the Gunners are to build a solid base at the back.

“If you can get it right in that central defensive pairing, that’s key – it always is,” Keown tells FourFourTwo. “Mustafi started in Germany’s first match at the Euros and looked very good; in fact he scored. He comes with the right sort of pedigree and I hope he comes with some leadership qualities as well. That’s something I feel is important if he’s going to play alongside Laurent Koscielny.

“Koscielny has developed a long way but Per Mertesacker has very much been the leader of the pair, so Mustafi must have those similar qualities as well.

“That central area at the back is really very important and you want experienced players. What you want now is for Mustafi to immediately put in the performances that Wenger is looking for.”

Mustafi has been tipped to overcome a minor injury to make his Arsenal debut at home to Southampton on Saturday. If he does so, he could dislodge 20-year-old summer signing Rob Holding from the Gunners' defence. Holding has started their first three matches – in contrast to fellow defender Calum Chambers, who was dropped and loaned to Middlesbrough following a 4-3 loss to Liverpool.

Rated! The deadline signings you NEED in your fantasy team – and those to avoid

“Holding looks like a good acquisition because they’ve only paid £2.5m for him and he looks solid,” says Keown, giving his views ahead of taking charge of a combined team of legends and YouTube stars in the EE Wembley Cup Final.

“Holding handled it well in the first match, thrown in at the deep end. You expect Chambers to have coped better because he’d been around longer, and maybe that’s why they’ve shipped him out. Maybe they feel he hasn’t developed.”

Martin Keown was speaking at The EE Wembley Cup Final at Wembley Stadium connected by EE. To view the last episode in the Wembley Cup online series and watch footage of the match, head to www.ee.co.uk/wembleycup