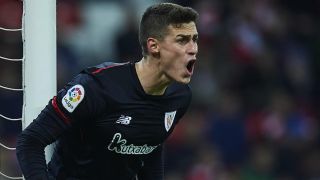 The 23-year-old's release clause has been set at €80million – up from a rumoured €20million under the one-cap Spain international's previous terms.

Earlier this month, Athletic coach Jose Angel Ziganda claimed he was in the dark over speculation Kepa had undergone a medical at Madrid, insisting the player had not been given permission to do so.

Despite suggestions the Spanish and European champions were set to test Athletic's resolve, their head coach Zinedine Zidane maintained they had no interest in entering the January market – something Kepa's renewal with the Basque side makes more likely.

Athletic Club and have signed the renewal contract by which the player will remain in the rojiblanca discipline until 30 June 2025. His cancellation clause will be 80 million Euros. January 22, 2018

Kepa has impressed as Athletic's first-choice goalkeeper since returning from a loan stint with Real Valladolid at the start of last season.

Manchester United and Spain keeper David De Gea has long been linked with a move to Real Madrid, with Chelsea's Thibaut Courtois also a mooted target.

However, for now at least, Keylor Navas' grasp on the number one shirt at the Santiago Bernabeu remains secure.