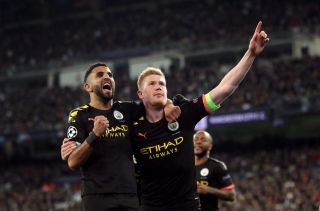 Kevin De Bruyne was happy to shoulder the responsibility after firing Manchester City to a famous Champions League win at Real Madrid from the penalty spot.

The Belgian ended City’s recent spot-kick woes by by scoring seven minutes from time at the Bernabeu Stadium to seal a dramatic 2-1 comeback win in the first leg of their last-16 tie.

Between Sergio Aguero, Gabriel Jesus and Ilkay Gundogan, City had missed five of their previous seven spot-kicks but De Bruyne held his nerve under fierce pressure to put City in sight of the quarter-finals.

The result gave the club a huge lift during a difficult period as they appeal against a ban from European competition for the next two seasons.

De Bruyne said: “I was the one on the paper and I took my responsibility. I never blame someone if they take it and miss it – it happens. Obviously you want to score it.

“But I took the responsibility and shot it good. It’s nice.”

City’s stunning win was vindication for manager Pep Guardiola’s surprising team selection in which he named Aguero, Raheem Sterling, Fernandinho and David Silva on the bench.

The first half was a cagey affair of few chances but City upped the tempo after the break and were unlucky when Isco struck against the run of play on the hour.

The visitors responded superbly with De Bruyne crossing for Jesus, who played most of the game on the left wing, to head the equaliser after 78 minutes.

Substitute Sterling then won the penalty for De Bruyne to complete the fightback.

The 28-year-old, whose goal was his 50th for the club, said: “In the first 50 minutes we showed them a little too much respect and it put a bit more pressure (on us).

“The first half was 50-50, the second half I think we started really well but then we made a little mistake and then came 1-0.

“But the reaction was really good. Afterwards we showed we could create some chances here. I think in the end we deserved to score two goals. It was a good performance.”

City’s performance showed their players are capable of putting the club’s off-field problems to one side to deliver on the biggest stage.

They will now hope to complete the job in the second leg at the Etihad Stadium in three weeks, but before that comes the small matter of the Carabao Cup final at Wembley.

City will take on Aston Villa on Sunday bidding to win the competition for a third year in succession and a fifth time in seven seasons.

De Bruyne said: “No matter what happens you have to go again. If we’d lost we would have to go again on Sunday but we want to win the League Cup like every cup. It’s obviously very important for us.”