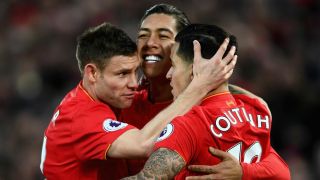 Former Liverpool winger Harry Kewell has backed the Reds for a favourable result against Manchester City and expects them to finish in the Premier League's top four.

Jurgen Klopp's side head into the match at the Etihad Stadium in fourth place, with a five-point cushion to Arsenal in fifth, although they have played two more games than the Gunners.

Liverpool have failed to win any of their last four away games in the top flight, a run that includes two defeats against struggling sides Hull City and Leicester City.

But Kewell - a Champions League and FA Cup winner during a four-year spell at Anfield - believes their impressive form against the better teams stands them in good stead of securing a return to Europe's top competition.

"To be able to play under a manager that shows so much enthusiasm and so much passion would be a pleasure and an honour," Kewell told Omnisport.

"They play fantastic football - they've only stumbled against the lower teams. They've got a fantastic record against the higher clubs, so they only need to concentrate that little bit more against the teams down at the bottom of the league.

"I think they've had a little bit of a stumbling block but everyone goes through that in a season, so I can't see them stumbling any more. They've got a massive game coming up with City. They can go to the Etihad and get something. I'm confident Liverpool will be in the top four."

Liverpool have yet to lose a league game this season against any side currently in the top half of the table, while they defeated City 1-0 in the reverse fixture on December 31.

Although Kewell is backing another positive result against Pep Guardiola's side, he is wary of the threat posed by City's speed in attack.

"They go forward with blistering pace and that's what catches a lot of teams on the defence," he said. "They can turn defence straight into attack and in three or four seconds be taking a shot away."

Striker Gabriel Jesus will miss out due to a broken foot but Kewell expects the Brazilian to develop into one of the world's finest forwards when he regains full fitness.

"He had a wonderful start," added the former Australia star. "He's come to a City side that are young, fresh and exciting. You must be something special if you can put [Sergio] Aguero out of the team.

"It's such a shame that he had that injury. It's an annoying little injury. Let's hope he fully recovers because I believe he could be a star in world football."