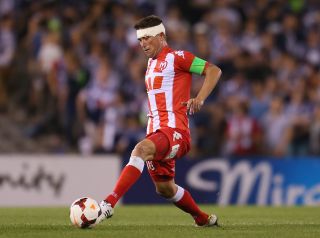 Kewell is yet to pass a fitness test after suffering whiplash against former club Melbourne Victory in round one but is expected to make his comeback against the second-placed Wanderers at AAMI Park.

The Heart are languishing in last place after opening their campaign with two draws and a 3-0 loss to league leaders Brisbane Roar last start, while the Wanderers are coming off a gritty 2-1 win over Adelaide last Friday.

Wanderers coach Tony Popovic, who played alongside Kewell with the Socceroos, is unsure whether the former Premier League star will play but is preparing his charges to face the veteran striker.

"He's a class player, we don't know whether he'll play or not but if he does we expect to see Harry and his quality on the field and we'll be prepared for that and we'll do our very best to try and nullify him," Popovic said.

"I don't know what kind of shape he's in... but we'll just prepare ourselves for this game and try and improve on and build on what we've been doing."

Popovic is equally unsure if livewire winger Youssouf Hersi will be available for the Wanderers this weekend.

"It's a tough one to call really, he's a lot better, he's doing some work today and it's a real day-by-day proposition," he said.

Meanwhile, former Sydney FC captain Terry McFlynn is in line to return for the Sky Blues in Saturday's grudge match against Victory at Allianz Stadium.

Frank Farina's side are coming off three straight defeats and McFlynn admitted they face a tough test to turn things around against a Victory line-up that made a winning start under new coach Kevin Muscat against Wellington on Monday night.

"We just have to keep working hard and work smarter in a lot of areas," McFlynn said.

"I think the performance on the weekend (against Perth) showed that we created 12 clear-cut chances, 11 of them from open play, one from a set-piece.

"So we're creating chances and now it's about putting confidence into the players and turning chances into goals.

"As history shows it's always been tight encounters between us and we're really looking forward to the game."

In other round five action, Wellington Phoenix will be hoping to finally get some reward for their spirited start to the season when they host the in-form Perth Glory in Christchurch on Saturday.

Sixth-placed Adelaide United host the seventh-placed Newcastle Jets on Saturday afternoon, while Central Coast Mariners and the Roar complete the weekend with a blockbuster clash in Gosford on Sunday afternoon.