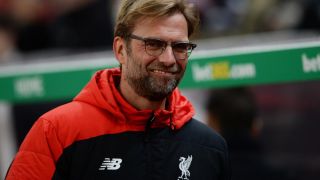 Jurgen Klopp can turn Liverpool back into a force of world football, according to former winger Harry Kewell.

Klopp, 49, took over at Anfield in October last year after the club sacked Brendan Rodgers.

The German guided the club to Europa League and League Cup finals in his first season, but ultimately came up short on both occasions.

However, Kewell - who won the Champions League with Liverpool in 2005 - is confident Klopp is the right man to lead the club forward.

"I'm excited, I won't lie. I think the club can become a force again with him in charge," the Australian, now coach of Watford Under-21s, told the Liverpool Echo.

"I think this is a hugely important time for the club. They have a top manager in place now, and I think that he believes he can bring success.

"I think back to when I went there in 2003 – everything was about ending that wait for a title. That was 13 years ago, and they’re still waiting.

"It's the biggest club in Britain, and you can sense just how much it craves that league title. Everyone wants it, and I think with Jurgen Klopp in charge they can get there."

He added: "I enjoyed Brendan Rodgers' team a couple of years ago, but I think what Jurgen brings to the table in terms of that passion, desire and knowledge can make the difference.

"It's easy to say, but I think there are good times ahead. I have a lot of Liverpool-supporting friends, and I don't think I've ever seen them this excited about a new season.

"And if they are excited, then so am I!"

Kewell moved into coaching after retiring as a player in 2014, and the 37-year-old has set his sights on becoming a manager at the highest level, which could one day see him take charge at Anfield.

"I've made no secret of that desire [to become a manager]. Just like when I was playing, I want to test my limits at the highest level possible," he said.

"I've taken my first steps into this career and I am keen to keep progressing. I'd love to get the opportunity to be a manager at some point."