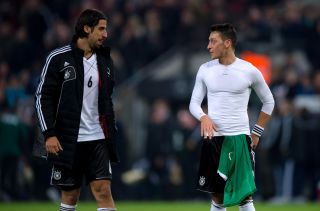 Carlo Ancelotti's side are five points off the pace through eight matches, with Barcelona and Atletico Madrid - the club's two harshest rivals - both with a maximum 24 points.

Khedira said the departure of Real Madrid midfielder Sami Khedira with ex-club team-mate Mesut Özil to London in the off-season has made it tougher on the Bernabeu outfit.

"I don't know if it's a matter of time or something else, but we still haven't found ourselves as a team," Khedira said.

"Losing a player of his (Özil's) ability would weaken any side."

Khedira also hit out at media critics, after being on the end of some tough love in Spain due to Real's floundering form.

"I'm never going to be a favourite of the Spanish press," the German international said.

"I started the season on the bench or even in the stands and now I'm being used as a scapegoat once again.

"Even when I play well it isn't valued.

"I'm not a Spanish player, I didn't cost a whole load of money and I'm one of Mourinho's disciples.

"I feel that I have not been treated correctly but I don't let it affect me.

"I'm never going to be loved by the press - all I'm asking for is some respect."