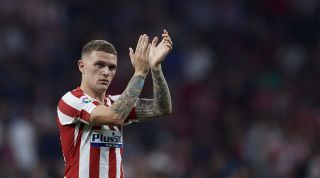 The La Liga side came from behind to win at Anfield and secure a 4-2 aggregate triumph in the last 16 of the Champions League.

Jurgen Klopp was critical of Atletico's defensive game plan in the second leg, but Trippier believes his team did nothing wrong.

"If you go there and go toe-to-toe with Liverpool, you're going to get beat 6-0. I don't know what people expect," he told the Daily Mirror.

"You see pundits complaining because we did defend, but did they expect us to go there and play attacking football, especially with Liverpool playing the way that they're playing at the moment? You need to go there with a plan and we did that.

"We did have to defend, but the most important thing is that we got the win.

"We knew they'd slow down. It took us over 100 minutes, but we won 3-2. People can complain as much as they want, but we thought it was necessary for that type of game.

"As I've got older it has stopped bothering me. Liverpool didn't put their chances away and we beat them in both legs. It worked and that's what football is about."

Atletico's progression to the Champions League quarter-finals has since been overshadowed by the coronavirus pandemic.

La Liga is currently suspended indefinitely, with a Spain-wide state of emergency likely to last until April 12 at the earliest.

Meanwhile, UEFA has put the Champions League and Europa League on hold as COVID-19 continues to spread throughout the continent.

The European Championship has been pushed back to summer 2021 to give the club game more time to complete the 2019/20 season.