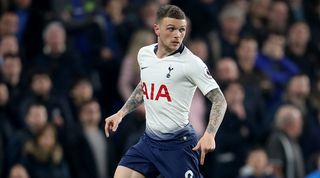 Napoli boss Carlo Ancelotti has refused to rule out a move for Tottenham right-back Kieran Trippier.

After starring at the 2018 World Cup, the England international has endured a difficult campaign at club level.

Mauricio Pochettino is willing to sell the defender this summer, with Manchester United among the clubs who have been linked with the ex-Burnley man.

Napoli are also said to be keeping tabs on Trippier, whose wife was reportedly spotted looking at schools in Naples for the couple's young son.

And Ancelotti confirmed his interest in the right-back when he was asked about transfer targets in a press conference.

"I don't like talking about players from other teams," he said. "Trippier's wife in Naples? I honestly don't know, but Naples is a beautiful city, there are people who come on holiday.

"But [Hirving] Lozano and Trippier are players who we are evaluating, then later there is everything else that is much more complex. Negotiations, players who prefer other things. These are among the players we are interested in."

Tottenham face Ajax on Wednesday as they look to overturn a 1-0 deficit in the second leg of their Champions League semi-final.

The 15 best free-kicks of all time: Where does Messi vs Liverpool rank?