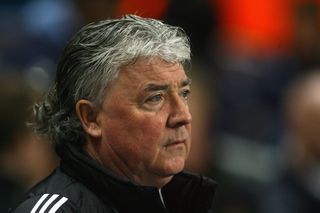 The 66-year-old was recruited to the role by the Premier League outfit in June, though his arrival at St James' Park instantly prompted rumours of discord between Pardew and club chairman Mike Ashley.

Newcastle have since signed just one player - QPR striker Loic Remy on a season-long loan - and kicked off the new season with a 4-0 defeat to Manchester City and a dour 0-0 draw with West Ham at home.

But Kinnear insists he cannot understand the pessimistic mood around the Tyneside club, and says his relationship with Pardew is in good working order.

"I don’t understand where the negativity has come from – we are two games into a 38-game season and already the doom-and-gloom merchants are looking for a scapegoat," he told The Daily Mirror.

"Alan Pardew has signed 16 players costing £60m in the last two years, Newcastle United’s wage bill is now comfortably in the top 10 in the country, and he will continue to get all the support the club can reasonably provide.

"Last week we flew to Nice, and we were met by a private helicopter transfer to Mike Ashley’s yacht off St Tropez, and we spent seven hours thrashing out every idea, and how we plan to take the club forward.

"I listened to every word Alan and the owner had to say – along with chief scout Graham Carr, who was also there – and we talked about the next stage for Newcastle United and where we wanted to go.

"Before the season started, we had sat down and agreed the squad was big enough, and strong enough, to finish in the top half of the table. But we are working together – not plotting against each other.

"There seems to be a perception, from outside the club, that we are at loggerheads, but I don’t know why people are jumping on the bandwagon because it is a false picture."