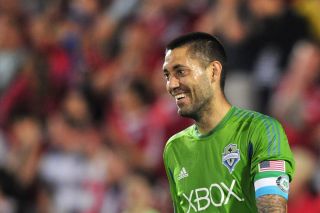 Dempsey, 31, has made a stunning start to the MLS campaign, scoring six times in seven games for the in-form Sounders.

Klinsmann said Dempsey's loan spell at Premier League side Fulham, albeit largely unsuccessful, was a big reason for his recent success.

"(I'm) very happy that Clint has picked up the rhythm and find his confidence and is part of almost every goal that Seattle scores," the German said.

"That's really a good sign, it's great for us going into the final weeks before we hit the preparation for the World Cup knowing that he's building his confidence more and more and more.

"And it's due to his hard work that he put in for January, February, being at Fulham.

"It was not a successful time, but he built a foundation for the months afterward so he seems to now (be in form) at the right time."

Klinsmann's men face Germany, Portugal and Ghana in a difficult Group G at the FIFA World Cup in Brazil.

The 49-year-old said players staying fit was of the utmost importance ahead of the tournament, with one injury potentially ruling some out.

"You hope that everybody stays healthy," Klinsmann said.

"But first and foremost you want them to stay healthy from now on because if a new injury now happens, you have pretty much no chance to recover any more before the World Cup."