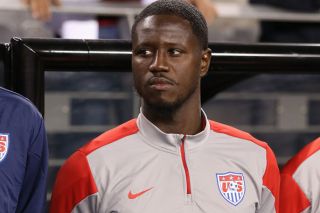 Klinsmann announced his preliminary 30-man selection on Monday, with Johnson a notable absentee for the upcoming trip to Brazil, where the US have been drawn against Germany, Portugal and Ghana in Group G.

Johnson, capped 63 times by the national team, scored four goals throughout the States' World Cup qualifying campaign - only team-mate Clint Dempsey was more lethal in the attacking third with eight to his name.

But the 30-year-old, who featured at the 2006 World Cup in Germany and made the initial squad four years later, has struggled for form since joining DC United from MLS rivals the Seattle Sounders, which worked against him.

"I spoke with Eddie for a long time on the phone and I tried to explain this as well as I can," said Klinsmann, who represented Germany at three World Cups between 1990 and 1998.

"I always recognize Eddie's value and strengths overall, not only by scoring very important goals for us, getting us to Brazil, but also he is a player that can make a difference within seconds of being on the field, if it's scoring a goal or making an assist.

"But it has to do a little bit with the fact that we take six forwards into the 30-man roster and in those forwards I also see Landon Donovan competing for one of those spots.

"I don't see Landon as a midfielder coming in, I see him clearly as a striker. You go through every one of those players and you evaluate their strengths and weaknesses and what they bring to the table.

"I just felt like the way I want to build that puzzle for the 23-man roster, I see those players competing a little bit ahead of the curve."

The US will head to Stanford University for a training camp, where they will face Azerbaijan (May 27), Turkey (June 1) and Nigeria (June 7) before opening their World Cup campaign against Ghana in Natal on June 16.