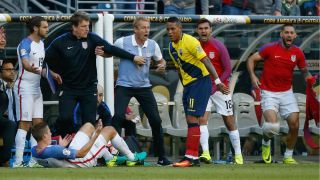 Jurgen Klinsmann branded the decision to send Jermaine Jones off in the United States' 2-1 Copa America win over Ecuador as a "disgrace".

Jones was dismissed early in the second half for lashing out at Michael Arroyo in a melee caused by Antonio Valencia kicking Alejandro Bedoya - also earning the Manchester United man a red card.

The incident played out in front of Klinsmann on the touchline and the German was quick to focus on referee Wilmar Roldan's performance rather than his side's spot in the Copa semi-finals.

"It was an absolute joke," Klinsmann said.

"I was right there, and the fourth referee made that decision, not the referee.

"The referee didn't see it. He followed the advice of the fourth official out there.

As well as Jones, Bedoya and Bobby Wood will also be suspended for USA's semi-final against Argentina or Venezuela after picking up costly bookings against Ecuador.